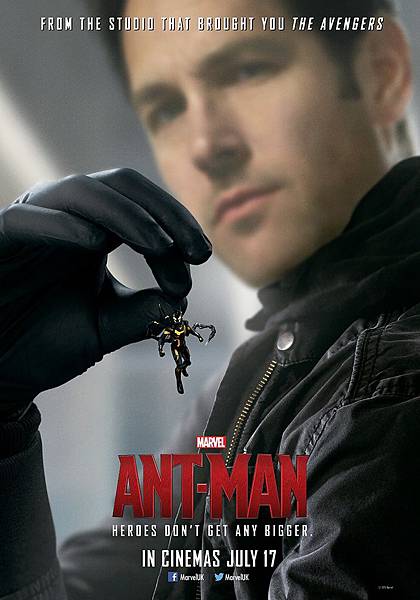 The latest tracking for Walt Disney's Ant-Man points to an opening weekend of around $65 million come July 17th. That would put it exactly on par with the $65m debuts of Thor and Captain America: The First Avenger back in 2011. And indeed those were the last two Marvel films that were non-sequel non-ensemble superhero origin stories. The first tracking from a couple weeks ago put the film's likely debut at $55m, so the numbers are indeed going up. The film's profile is increasing as the release date gets closer, and the mostly indifferent reaction to Terminator Genisys will only help matters. Also helping is the fact that everyone who has seen Jurassic World over the last month saw a preview for the Peyton Reed caper adventure, with IMAX audiences getting a relatively charming six-minute extended preview. Coupled with a flurry of initial reviews dropping next Wednesday at 1:00pm just in time for the SDCC (so yes, check back here accordingly) and the fact that it's Marvel's cheapest movie ever ($130m), it would appear discussions of Marvel's imminent failure may be a bit premature.

One thing that Ant-Man does have which sets it apart from its brethren is an actual honest-to-goodness movie star in the lead role. Unlike pretty much every other non-sequel Marvel movie thus far, the star of Ant-Man, Paul Rudd, is a both a known entity and a proven box office draw. That's not to say that previous Marvel movies were headlined by actors plucked off the street, but to general audiences that may-well have been the case in several instances. Chris Hemsworth was a glorified unknown when Thor debuted, and Chris Evans was a vaguely known actor who had played Johnny Storm in the first batch of Fantastic Four movies before making a bunch of lower-profile films that you probably didn't see (Sunshine, Push, Street Kings, The Nanny Diaries). Save for a high-profile cameo in the geek-friendly flop Scott Pilgrim vs. the World, Evans was not all-that-well known beyond the film pundit circle and certainly was no box office draw.

Same goes for Chris Pratt, who is arguably a star now but was known as a supporting player in the cult sitcom Parks and Recreation prior to the triple whammy of The LEGO Movie, Guardians of the Galaxy, and Jurassic World. Mark Ruffalo is a critical darling and a true added value element in that he makes good films great and bad films watchable, but he is not an opener and probably never will be in terms of the kinds of artistic choices he makes. Edward Norton and Robert Downey Jr. come the closest, but both were critical darlings more than box office draws. Outside of the platforming word-of-mouth sensation The Illusionist in 2006, Norton's hits were ensemble pictures (Red Dragon, The Italian Job) while Downey Jr. never really headlined an out-and-out hit film before Iron Man. He was a beloved performer prior to his personal issues, and he had enough of a profile to make his casting as Tony Stark merit attention, but he was not, and really still is not, a draw outside of the safety of preordained franchises.

But Paul Rudd is an actual "name on the poster/face in the trailer" movie star. Granted, he is a comedic movie star, and comedies are often relatively cheap, but Ant-Man is being sold as much as a character comedy as it is a caper adventure and/or comic book superhero movie. The pitch has mostly been "Come see a witty and charming comedy with Paul Rudd, that also happens to be a big-budget superhero adventure from the guys that brought you Guardians of the Galaxy." As such, Paul Rudd's popularity as a comic actor has been and will be a boon to the financial prospects of Ant-Man in a way not-yet really seen in the world of non-sequel Marvel movies. He has been a viable supporting player going back to Clueless in 1995, with high profile recurring guest star gigs in Friends and Parks and Recreation supplanting his membership in the Judd Apatow club.

He has a few solid $17m-$23m opening weekends to his credit (I Love You, Man, Role Models, Dinner For Schmucks) that turned into solid leggy hits. Even This is 40 legged its way in December 2011 from a $11m debut to a $67m domestic total. He also had high-profile supporting roles in the likes of Knocked Up, Forgetting Sarah Marshall, and the Anchorman pictures. Not every film he headlines has been a hit (Wanderlust and the underrated Admission opened just over $6 million and ended just over/under $18m domestic), but he has a huge profile among the kinds of general moviegoers, especially female moviegoers if I may generalize, that might not necessarily want to see a Marvel movie about a character they've never heard of. Unlike pretty much every prior Marvel original up to this point, the lead is played by a genuinely well-known, well-liked, and box office-friendly movie star.

I'm not saying that Paul Rudd will automatically make Ant-Man into a massive smash hit along the lines of Iron Man and Guardians of the Galaxy. But I am saying that the box office trajectory for Ant-Man will be interesting to watch because it's the first time that one of their non-sequels has had a genuine "face on the poster" movie star who may be a bigger draw than the hero being sold. Now that's not to say that the biggest marketing hook for a Marvel movie still isn't the fact that it's a Marvel movie. But having a genuine "I can open a movie" movie star in one of their films is an ingredient that Marvel Studios has never really had to play with before, so it will be interesting to see how that plays out. Anyway, Ant-Man, starring Paul Rudd, Michael Douglas (arguably a draw for older audiences as well), Evangeline Lilly, Michael Pena, and Corey Stoll, drops July 17th. As always, we'll see. Well, you'll see as I've already seen the movie, but you can check back here Wednesday afternoon or Thursday morning for the word on that.