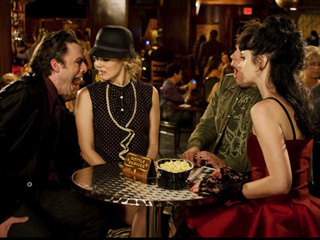 Are you totally buggin' for her to have a big screen comeback, too?

This could be it, PopWatchers, the thing that finally gets me into the vampire genre. I couldn't be wooed by the Twilight saga, nor was I willing to take a bite out True Blood. But Vamps, the new comedy from director Amy Heckerling, about two blood-sucking gal pals (un)living it up in New York City, all while dealing with the drama of falling in love with a mortal, could be the one to do the trick. Why?

As if you even needed to ask: Alicia Silverstone is in it!

But even if my vampire aversion got the best of me, I think I'd still have to check this show out, because this could very well be the Alicia Silverstone comeback I've been waiting for. Sure, there have been false cries of her having a comeback before (she appeared in 2005's Beauty Shop and more recently in the indie The Art Of Getting By, not to mention those unmemorable attempts on the small screen, like 2003's Miss Match), but it's the first time she's re-teaming with Heckerling, her Clueless director.

It sure doesn't hurt that she'll also be starring alongside the likes of Krysten Ritter, Justin Kirk (pictured, far left), Sigourney Weaver, and — fellow Clueless cast member bonus! — Wallace Shawn (ahem, Mr. Hall). Along with a strong ensemble and a director that gets her — like Heckerling so clearly did in 1995 — Silverstone has the comedic chops to hold her own. After all, her performance as Cher Horowitz in Clueless was one of funniest of the 90s, or arguably, of all-time, so seeing her once in a comedy most certainly won't, you know, suck.

I know I can't be the only one wishing and hoping for a long-overdue Silverstone comeback, either. Do you think Vamps will be the thing that does it or did the actress simply peak with Clueless? Share your thoughts in the comments section below…it's way existential.