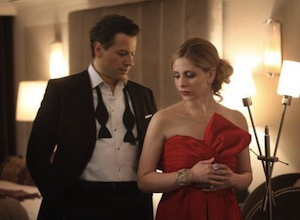 There are two reasons why Sarah Michelle Gellar, TV's erstwhile Buffy Summers, elected to return to the small screen after an eight-year absence — and one of them is a 20-month-old girl named Charlotte Grace Prinze.

Speaking with TVLine before The CW's upfront presentation announcing the premiere of Ringer, on which she plays dual roles, Gellar explained, "As a mom, I decided it was something that was going to afford me the chance to do both" — that is, act and be an attentive parent (aka "the most rewarding experience of my life," as she put it).

Gellar, who is wed to Freddie Prinze Jr., isn't the only Ringer cast member with a young'un on hand. Kristoffer Polaha (Life Unexpected), just welcomed his third son this January, while Ioan Gruffudd (Fantastic Four) has a daughter almost exactly the same age as Charlotte Grace.

"We're a show of all young parents, and we've made it so that the babies feel just as welcome as we do," she shares. "It's really been a nice environment." 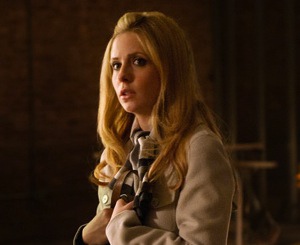 The other huge draw for Gellar was Ringer's premise, which has her playing Bridget, a troubled young woman who, to escape the mob, adopts her MIA twin's identity — only to realize that her sis, Siobhan, has heaps of problems of her own.

"I was just fascinated by the show," Gellar says, "and by the people I got to work with."

Among Gellar's costars, the aforementioned Gruffudd plays Bridget's brother-in-law, while Polaha is her BFF's husband (with whom she was having an affair!). Lost's Nestor Carbonell plays an FBI agent hot on one of the ladies' trail.

That's a lot of good-looking guys even for one gal leading a double life. To whom does Gellar think Bridget will gravitate? "All of them!" she wagers. "Have you seen the men on my show? All of them."

As for tackling a dual role, Gellar says that while "you might see a little more of Bridget, Siobhan won't be long-lost" by any stretch. In fact, as seen in some preview clips, Gellar will have numerous opportunities to act opposite herself.

As the mysterious narrative unfolds, "We're discussing doing some of it from one twin's perspective, some from the other, you're going to see flashbacks that explain how they got to where they are…," Gellar previews. "I want to make sure that the story for both of these girls comes to life."