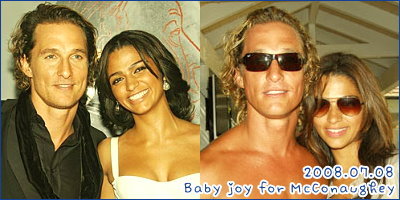 LOS ANGELES (Reuters) - Matthew McConaughey's Brazilian girlfriend has given birth to a boy, People magazine reported on its Web site on Tuesday.

The child -- the first for McConaughey and model Camila Alves -- was born on Monday evening, the report quoted the actor's publicist as saying.

McConaughey, 38, said in January that he and Alves were "stoked and wowed" by the pending arrival. He started dating Alves, a native of Rio De Janeiro, after breaking up with Spanish actress Penelope Cruz in 2006.

The actor, once named "Sexiest Man Alive" by People, starred in the recent romantic comedy "Fool's Gold" with Kate Hudson.


Matthew McConaughey And Camila Alves Have A Boy

Matthew McConaughey and Camila Alves have welcomed a baby boy into the world Monday night. He was born at 6:22 p.m. in Los Angeles, weighing in at 7 lbs., 4 oz.

The pair have been dating for about two years. No word yet on the name of the child.