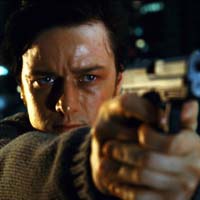 The Brit actor talks to Entertainmentwise about his new movie Wanted, hitting the gym, & getting beaten up by Angelina Jolie...


A long way from his breakthrough role in Shameless, James McAvoy has really hit the big time in tinsel town. Roles in the first Narnia movie, and two huge Oscar hits with Atonement and The Last King of Scotland, mean the 29-year-old Glaswegian has firmly made his presence known in the film industry. Today he’s here to talk about his role as Wesley, a nine-to-fiver turned assassin in the new summer blockbuster Wanted, starring Angelina Jolie.

At his own admission, this is a huge change of pace for McAvoy.“That was really why I did it, I think. When I look for something to do, I ask myself ‘is it different? Does it challenge me? Does it make me employ a new acting style?’ This satisfied all those things.”

He also feels Wesley has a resonance beyond the crash-bang action of the movie. “I think he represents a part of society that’s quite new - this guy in his mid 20’s, he’s got a home, he’s got a family, he’s got his girlfriend, but still he finds that he just can’t bring himself to smile. It’s a really interesting place from where the film develops.”

There was an intense amount of gym work required to prepare McAvoy for the physical endurance of making an action film, something the actor grew tired of quickly.

“For 6 weeks before we did filming I did that, and it was great. 4 weeks into filming, it was still great, loving it. Then about the 5th week in, I was like ‘you know what? You can stick this,’” he laughs.

Luckily his personal trainer was on hand to see him through to the end: “He really forced me to do it for the next three months, and I’m glad he did because I don’t think I’d have been able to get through this if I hadn’t been fit. The way I am naturally I just wasn’t fit enough.”

A big scene in the film involves Wesley being beaten up by Angelina Jolie’s character, Fox. “In the film the character (of Wesley) says ‘I’m going to kick your effing ass!’ and swings for her, that was completely added because I felt completely undermined as a man, and thought I should try,” McAvoy explains, “but I completely fail to do that and she ends up beating me even more!”

The actress gave out equally frank advice when they did stunts together - “her best piece of advice was to say to me ‘just shut up and enjoy it!’”

As for the future, McAvoy is keen to jump back into the action genre very soon. “The reason I did this film was to challenge myself and do something different, and see if I could do something new. So I’m hoping the next film I do will be challenging again.”

What about the rumours that he’s about to play Bilbo Baggins in Guillermo Del Toro’s The Hobbit? “Sorry, not true” he shrugs, “it’s all internet talk!”