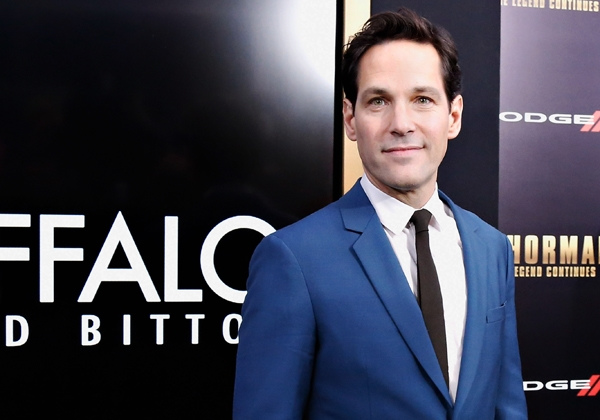 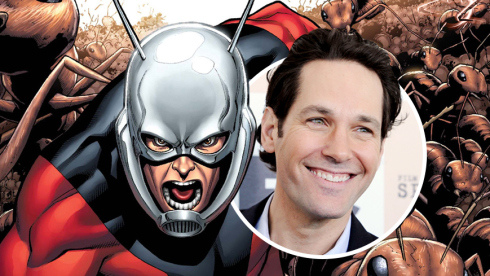 Marvel's "Ant-Man" has found its hero in Paul Rudd, who will star in the new film from director Edgar Wright hitting theaters July 31, 2015!

The casting of Rudd represents the actor that Marvel and Wright had long ago identified as its first choice to play Ant-Man, continuing the studio's desire to cast actors that bring several dimensions to its onscreen heroes. The film's plot is being kept under wraps.

Rudd brings a diverse background to the role having become one of the industry's most known actors with a reputation for smart, funny and creative performances. Rudd can currently be seen in "Anchor Man 2: The Legend Continues", as well as past roles in "Anchorman", "This Is 40", "I Love You, Man", "Role Models", "Forgetting Sarah Marshall", "Our Idiot Brother", "Knocked Up", and "The 40-Year-Old Virgin" among numerous other films, television shows and primetime animation.

In addition to "Ant-Man", Marvel Studios will release a slate of films based on the Marvel characters including "Captain America: The Winter Soldier" on April 4, 2014; "Guardians of the Galaxy" on August 1, 2014; and "Avengers: Age of Ultron" on May 1, 2015.

Marvel is ready to name its next superhero as sources tell Variety that Paul Rudd is in early negotiations to star in 'Ant-Man'.

Rudd, along with Joseph Gordon Levitt, was considered one of the front-runners for the part, as Variety first reported. Rudd stars in eagerly-awaited sequel 'Anchorman 2', which opened Tuesday night.

Edgar Wright is helming and co-wrote the script with Joe Cornish. Marvel had no comment on the casting.

In the comics, the character's alter-ego is Henry Pym, a brilliant scientist who invented a substance that allowed him to change his size and communicate with insects. One scenario that was rumored when Wright first came on is that he would focus on the later years of Ant-Man and add the character Scott Lang, a crook who steals Pym’s technology and becomes the new Ant-Man. This may hint at the idea that both Rudd and Gordon Levitt could potentially become involved in the film, although the idea seems unlikely.

Kevin Feige will produce for Marvel.

Rudd is an interesting choice as a super-hero, since he is known more for his comedic roles than action-heavy roles. It's a move that recalls the company's choice of Robert Downey Jr. to play Iron Man. Downey didn’t have the look of an action hero, but shared elements of Tony Stark's personality, which led to him being tapped for the role.

Rudd is repped by UTA and Brillstein Entertainment.

Paul Rudd will shrink down a few sizes when he suits up for Ant-Man, a new Marvel superhero movie set to hit theaters in July 2015.

Rudd will portray Ant-Man and his alter-ego Henry Pym, a scientist who discovers a formula that allows him to shrink down to the size of an ant, the BBC reports. For those curious about what such a pint-sized hero can achieve, know this: in his first-ever comic appearance, Ant-Man took down several Soviet agents trying to steal his shrinking serum – and triumphed with the help of, yes, an army of ants.

Ant-Man will be directed by Edgar Wright, who helmed the action-packed trilogy Shaun of the Dead, Hot Fuzz and The World's End, as well as Scott Pilgrim vs. the World. Wright reportedly also helped with the screenplay, which is being penned by Joe Cornish (The Adventures of Tintin).

While there have been no other casting announcements for Ant-Man yet, Rudd was reportedly up for the role alongside Joseph Gordon-Levitt, who signed on instead to produce DC Comics' Sandman.

Before he suits up, though, Rudd reprises his role as Brian Fantana in Anchorman 2: The Legend Continues, which opened in theaters yesterday. You can also watch Rudd and the rest of the Channel 4 News team go head-to-head with the boys of One Direction when the actor hosted a recent episode of Saturday Night Live.

Paul Rudd As Ant-Man: How The Weakest Superpowers Could Make The Best Superhero Movie

Paul Rudd is going to play a superhero with the power to shrink down to ant size.

So, fine. Compared to fellow Avengers Iron Man (super-advanced iron suit!), Thor (actual god from another realm), and Captain America (super-soldier serum!), Ant-Man has a lot of catching up to do. But before you go worry that Paul Rudd has fully cashed in and signed on to the weakest imaginable superhero franchise, listen up for a second. This is good news! And not just because it means Paul Rudd has been working out a lot lately and will somehow become even more handsome and eternally youthful.

Ant-Man, another standalone superhero franchise from the Marvel factory, has been in the works for years under the guidance of Edgar Wright, the director of this summer's The World's End and three other features that effortlessly combined action, comedy, and actual human emotions. It's a passion project for Wright, who told us three years ago I think it'd be great to do a shrinking film about a bad-ass secret agent. Now, as wonderful as Paul Rudd is (and, really, have you seen his Anchorman 2 mustache?), he's never fit the bad-ass secret agent mold. But Wright made Michael Cera a convincing fighter in Scott Pilgrim vs. the World, and in The World's End upgraded Nick Frost from the bumbling sidekick of Shaun of the Dead and Hot Fuzz to a righteous brawler. Wright excels at creating unlikely bad-asses, and Rudd—who has never starred in anything remotely resembling an action movie—would be another in a long line of them.

Ant-Man is set to come out after 2015's sequel The Avengers: Age of Ultron, which means we won't get to see Rudd teaming up with Robert Downey Jr., Chris Evans, Chris Hemsworth, Mark Ruffalo, and all the rest. For now, at least. The Marvel Cinematic Universe is getting vaster and more ambitious, though, now able to contain both the Washington, D.C.-set political thriller that is next year's Captain America: The Winter Soldier and a movie in which Chris Pratt is a space cop and Bradley Cooper is a raccoon. Think of the Marvel Universe as another loopy, unfocused Judd Apatow movie, with a lot of good things going on but maybe no center to hold it together. Paul Rudd can be that center. Paul Rudd and his beautiful hair and his ant-powers are the superhero future. Trust us.

Is 'Anchorman's Paul Rudd Superhero Material? 'Ant-Man' In The Offing

The long-rumored crowning of Paul Rudd as Ant-Man is finally happening. He is Marvel's choice to star as the title character in the Edgar Wright-directed film. Rudd has proven himself adept at light drama and he is exceptionally good at comedy, but I never really thought of him as superhero material. Wright, who wrote the Ant-Man script with Joe Cornish, showed at Comic-Con two years ago a demonstration of the technology developed that displayed a speck-sized Ant-Man running down the barrel of a gun and then re-emerging in actual size to put a hurting on a bad guy. It was pretty cool stuff, but Wright put the whole thing down to make The World's End first. He did that mainly because the film's producer, Working Title's Eric Fellner, was diagnosed with cancer. Wright — who felt that Shaun Of The Dead — the first leg of what would become the Cornetto trilogy wouldn't have gotten made if it wasn't for Fellner — never would have forgiven himself if he didn't make the third film in the series quickly, just in case the producer's condition worsened. Marvel relented, and Kevin Feige agreed to wait. Fellner got his movie and, more important, a clean bill of health.

Now, it's Ant-Man's turn. Marvel chased Joseph Gordon-Levitt, who wasn't as interested in this as Warner Bros' Sandman, which he is eyeing to direct as well as star in and produce. Rudd was the other long-rumored choice. This will be a big test for Rudd; Marvel's superhero successes so far have been well-established outsized heroes that audiences grew up with. Guardians of the Galaxy will be the first real test for Feige's hit machine to launch a new franchise, and then Ant-Man will be under the microscope even more because it is not an ensemble. Marvel has a way of bolstering its movies with all those heroes who signed nine-picture option deals, but this will be an interesting one to watch. I'm just not sure that a size-changing hero is that interesting, and I'm not sold on Rudd as an action star. Maybe he'll prove me wrong. Marvel certainly has made a lot of right calls on superhero casting, from Robert Downey Jr to Mark Ruffalo, who made a splendid Hulk in The Avengers.

Now That Joseph Gordon-Levitt is 'Sandman', Paul Rudd is 'Ant-Man'

After hearing this past fall that Joseph Gordon-Levitt and Paul Rudd were the frontrunners to play Ant-Man in Marvels Phase Three title from director Edgar Wright (Shaun of the Dead), the deliberation is over, and it seems we have our tiny superhero cast. The Wrap has learned that with Joseph Gordon-Levitt heading to the comic book adaptation of Sandman at Warner Bros., the Anchorman and I Love You Man star is now taking the lead role as Hank Pym, the man who would become Ant-Man. Recent interviewers have noticed Rudd being in better shape than he was previously, but denied any involvement. Read on!

Of course, we wouldn't expect anything less of an actor signing up for the big screen comic book universe. The film would see Rudd playing a scientist who invents a substance that allows him to change his size and communicate with insects. The test reel shown at Comic-Con a couple years ago showed us just how cool the action could be in the hands of Edgar Wright (you can see it in an unofficial, but accurate storyboard recreation of the footage right here). Will there be an official announcement soon? We hope so, but in the meantime, this sound like it's a done deal.