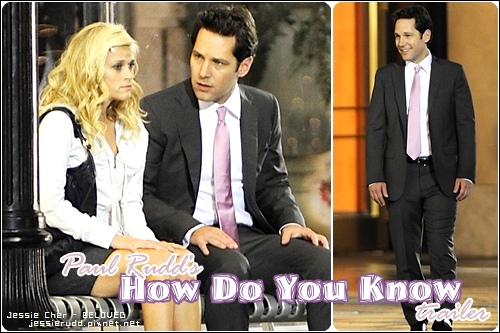 Paul on the set of 'How Do You Know'


This new movie has all the makings of a box-office hit. How Do You Know, an upcoming flick starring Reese Witherspoon, Paul Rudd, Owen Wilson and Jack Nicholson is more than just a typical chick-flick.

Beyond the obvious fact that the cast is completely star-studded and talented, the chemistry between the leads is brilliant. Check out the trailer to watch for yourself!

How Do You Know centers around Reese Witherspoon's character, who gets caught between two men, (Rudd & Wilson) -- it seems cliche, but from the looks of the trailer, it's not!

Paul Rudd plays the adorable and charming George, who is being indicted and attempts to run away from his problems. His father, played by the brilliant Jack Nicholson offers up fatherly advice and tells him to stay and deal with his problems. Owen plays Witherspoon's main-squeeze -- and, as always, is spot on with the comedic timing.

The film was directed by James L. Brooks and hits theaters this winter! Are you excited about How Do You know!?