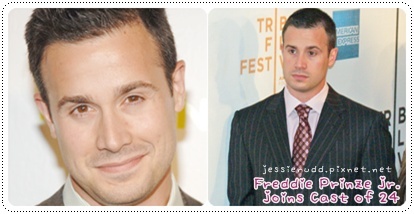 "Maybe once he found out his wife Sarah Michelle Gellar was pregnant, he figured it was time to get back to work? "

Freddie Prinze Jr. has landed himself a job. Maybe once he found out his wife Sarah Michelle Gellar was pregnant, he figured it was time to get back to work?

According to The Hollywood Reporter, Prinze is joining the cast of 24 as a series regular next season, playing Davis Cole, a recently returned Marine who runs CTU Field Ops and wants to follow in Jack Bauer’s footsteps.

Next season will feature a lot of new characters besides Prinze’s, including Anil Kapoor, who plays a Middle East leader; Chris Diamantopoulos, as the president's new chief of staff; and John Boyd as a CTU systems analyst. All of them are regulars, while Jennifer Westfeldt has come aboard as a recurring character, playing a journalist.

We wonder if Freddie’s character is being introduced to take over as the lead! We can’t imagine 24 without Jack Bauer, but how many times can he save the world without dying?! His time has to be up soon!

Oooh, look who's a tough guy. 24 has added Freddie Prinze, Jr. as the newest agent in the Counter Terrorism Unit. The move comes a day after it was announced the show was adding two other actors, John Boyd and Jennifer Westfeldt.

Prinze will play the very CTU-sounding Davis Cole, a former Marine who takes over the CTU Field Ops, says The Hollywood Reporter. But Cole has

grand ambitions: he is grooming himself to be the next Jack Bauer (played by Kiefer Sutherland).

Prinze jumped into Hollywood as a dreamboat in various teen-oriented movies such as I Know What You Did Last Summer and She's All That. He's also married to Buffy the Vampire Slayer star Sarah Michelle Gellar.

Hmmm… do you think Prinze can really pull off the macho needed to be a CTU agent?

Freddie Prinze Jr. just got employed again by snagging a regular role in the long running Fox tv show, “24″ which as of Wednesday (5-27-09) started filming for it's upcoming 8th season. According to reports, Freddie will play the character of Davis Cole who is a recently returned Marine that runs the CTU Field Ops. He also wants to follow in the footsteps of Kiefer Sutherland's character, Jack Bauer.

Also there will be other new cast members joining the show which include : Anil Kapoor who will play a Middle East leader, Chris Diamantopoulos-the president's new chief of staff, and John Boyd will play a CTU systems analyst. They will all be regulars. However, two other newcomers that they are bringing on, which include : Jennifer Westfeldt and Nazneen Contractor will play recurring roles. Jennifer will play a journalist,while Nazneen will play Kapoor's daughter.