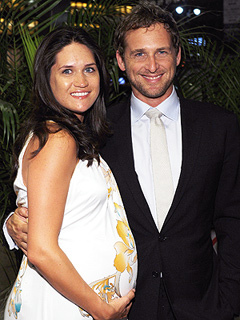 Josh Lucas is a dad!

The actor, 41, and his wife Jessica have welcomed their first child, a son, his rep confirms exclusively to PEOPLE.

After quietly tying the knot in New York City’s Conservatory Garden in March, the newlyweds confirmed that they were also celebrating pending parenthood.

Lucas, who starred in Sweet Home Alabama, most recently appeared on The Firm. His wife is a writer.

The couple wed in a discreet ceremony in New York's Conservatory Garden in March 2012, and confirmed that they were expecting a baby a few days later.

The 41-year-old actor - who has been romantically linked to actresses Salma Hayek and Rachel McAdams in the past - recently confessed he didn't know what to expect about becoming a father.

Josh said: "I've heard that one of the things that does happen being a parent is that you are emotional in ways that are surprising and that feelings happen inside of you that you
have never understood or known - and I must say already the experience of being pregnant, that's been true."

"We're still a few months away but everyone always says that you never know what it is until you experience it and so far that's absolutely true."