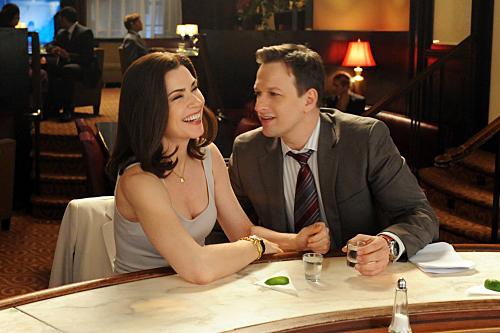 Emmy contenders: Behind the scenes with 'The Good Wife's Josh Charles

Upon occasion, we here at Awards Tracker will check in with a show's cast members to get their responses to some random questions. Today we spotlight CBS' "The Good Wife," in which Julianna Margulies plays Alicia Florrick, a woman who returns to the law career she abandoned after her politician husband is jailed in a scandal. She joins the firm run by her former classmate Will Gardner (Josh Charles) and his partner Diane Lockhart (Christine Baranski). She befriends the elusive investigator Kalinda Sharma (Archie Panjabi) and squares off against opposing lawyer Cary Agos (Matt Czuchry). Released from prison, Peter Florrick (Chris Noth) takes another run for office with the help of his obnoxious campaign manager, Eli Gold (Alan Cumming).

Here, Charles offers his insights into the "Good Wife" set and his castmates.

What has been your favorite scene to shoot so far?

I love doing scenes when we are in the judges' chambers. Getting to do scenes with Denis O'Hare, Linda Emond and Jane Alexander is really a joy. While researching the role, I found it fascinating to hear how differently lawyers and judges behave when they are behind closed doors and I think our writers do a wonderful job of showing that dynamic. I always enjoy any scenes with Julianna, but the scenes in the finale were really special to film.

What is your favorite off-camera moment on set?

When we all get the giggles and feel like naughty school kids while the crew patiently waits for us to get it out of our system. When F. Murray Abraham was with us, he told dirty jokes in between takes and kept us in stitches. I'm as bad as anyone: Around Halloween, I walked into a scene between Christine Baranski and Michael Boatman wearing a full Baltimore Ravens football uniform (with pads). Their reaction was priceless.

In what way do you hope your character grows?

Oftentimes, TV lawyers are portrayed as moral angels — always trying to do the right thing and sweating over the details. Will isn't like that. He wants to win, he's passionate about his clients, and he has shown that he is willing to do just about anything to win — from dumping a gun to going after a judge. At the same time, though, he's been struggling in his personal relationships. I hope that we get to see Will pay a price for his choices — something that hits him hard and rocks his approach to the law or to his relationships. Clearly, Will's sexual relationship with Alicia will change things and it will be interesting to see how Alicia's relationships and passions impact Will. I also hope that as we uncover Will's past, it will shed some more light on why he behaves the way he does.

Tell us something about one of your cast mates that most people don't know.

Well, Christine Baranski is a huge sports fan and loves the Red Sox and Patriots (as well as the Bills, since she is from Buffalo.) Also, Matt Czuchry is one of the best pingpong players I've ever seen.

What's your favorite legal or political drama of the past and why?

I'd have to go with "The Wire." True, it's not a legal drama but the show was one of the most poignant indictments of city politics to ever hit the air. It doesn't make a difference what season you watch: Each one stands as some of the best political TV ever.