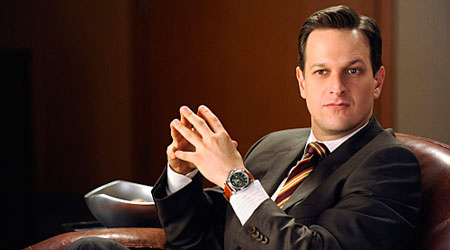 Josh Charles first charmed audiences and critics as Dan Rydell on Aaron Sorkin's Sports Night—now he uses that charisma to win cases as The Good Wife's Will Gardner. Will is an accomplished lawyer, and he's also got his share of will-they-or-won't-they sexual tension with the titular Alicia Florrick. I spoke to Charles about Will's development, his next move with Alicia, and what to expect from tonight's season finale.

The Good Wife has grown so much since it started. What do you think accounts for the show's success?

Yeah, I thought it had potential, but you really never know. I would say it's a combination of things. Ultimately, at the center would be the quality of Robert and Michelle [King]'s idea and their writing and the staff that they've put together. They really continue to surprise and amaze and put out such good material 23 times a year, which is really taxing and hard on everybody. And I think it's a testament to them that these last four episodes, in my opinion, could have each been season-ending episodes. They're striving for something greater than maybe sometimes you get to see on network. They're taking risks. They really believe in evolving and arcing characters slowly, [with] subtlety and nuance and ambiguity. All these things are great, and they're fun to play. It makes us all feel really excited and proud, and I think you mix that together—the writing—with the quality of acting I think we have on the show, and the guests that come on and play with us week in, week out, it's all working for people, which is a really nice thing. And I've got no complaints about that.

How do you think Will has changed since the start? Have you gotten more of a handle on the character in these two seasons?

The beauty of TV is that it evolves so much, you get to understand more and more about the characters as things come and go, as arcs move up and work their way out. The characters get revealed over a longer period of time. It has its own set of challenges, obviously, but the character has become—I like playing him. It's not always easy, of course, but I welcome it. I welcome the moral ambiguity. I welcome somebody who really isn't interested in doing things because people think it's the right thing to do—he's interested in doing things because he wants to win his case. He wants to win for his law firm. I think we've seen, what we've discovered about Will is a really tenacious, driven quality to him. As we reveal more of his backstory, which I think we'll get more into next season—I think maybe some of that was going to happen this year or reveal itself more at the end of this year, but it's going to shift into next season. And as it does, we'll get to understand more about him, more about why he does the things he does, and why he likes to push things to the edge. I think there was a lot of conflict going on within that character. It's fun to see.

What would you like to see play out on The Good Wife next season, either for Will or for the other characters?

Oh, I don't know. I think what you'll see [tonight], and I can't say a lot about it, what's fun is it really sets the template well for next season. People can sort of think about the next few months, the summer while we're off, the fans of the show can speculate and imagine where these different scenarios can go. They've thrown a couple bombs here on us. It's really fun, and some could say risky, and I applaud them for it. It will lead us into some really good conflict and drama.

I know you can't say much, but we're obviously wondering whether, now that Alicia and Peter are separated, Will's going to make his move.

I can't really say a lot about that, but I think [tonight's episode] will reveal itself. I don't want to sound like everything will tie itself neatly in a bow. It'll really lend itself to us going even deeper into things. What I'm most excited about—if you ask me specifically—I'm more excited about this thing we've alluded to of Will's deep dark secret that Blake had on him, from his past, when he was in his law firm in Baltimore. And what that is about. When we find what that is about, the repercussions from that, what happens, I'm excited to play that. I'm excited to explore that and to have that be revealed. It presents itself as a real great arc.

The Good Wife has some of the best guest stars on television. Has there been anyone you've especially enjoyed working with?

I love so many of them. I love working with Martha Plimpton. I love Patti and Will's characters together. I love what they do. And I know Martha's busy on her own show [Raising Hope], but it was fun that she got to come play with us again. I love the dynamic that that brings out in those two savvy lawyers. I love working with Gary Cole in the little scenes I've had with Gary. I love that character and what he brings to it. I love Denis O'Hare. I love F. Murray Abraham. Michael Boatman. What can I say? It just doesn't get any better. I'm really excited to read the script week to week, and after that, I'm really excited to see who's going to be playing the roles. People that I've worked with or always wanted to work with or just admired—it just seems like that's the gift we keep being given. It's really fun, really exciting to have that quality of talent come play with us. And I hope that they would all tell you that they were treated very well. It's a really warm set. Everybody works really hard and takes the work pretty seriously, but we also laugh a lot and try not to take ourselves too seriously.

How much have you learned about the law from playing Will? Do you think you could successfully argue a case?

[laughs] Definitely not there yet. But this last episode, as you'll see, I have a really huge closing argument I have to give. And Robert King, our co-creator, he directed the episode. It's the first one he's directed, and it was really exciting for all of us. He wanted to shoot the entire speech, which was very long, couple pages, in one steadycam shot. So we did many different takes of that all in one. It was very challenging and complex. It's cut into when you see the episode, because there are visuals and other things you see, so it doesn't actually play all as one take, but we wanted to shoot it as one, so it would kind of have a fluidity to it and a visual quality that you maybe haven't seen before. The courtroom is a challenging place to shoot, because there's really only so much you can do. Robert's a really visual guy and was interested in really mixing that up. He asked me if I was game for it, because it meant having to really know all of the lines super well, with not a lot of time to prepare for them. It was challenging but really fun. Being a lawyer—there are a lot of similarities. You do have to perform: You're performing for that jury all the time, even when someone else is talking. They're watching everything. They're critical of everything, every move you make. But no, no sense that I would ever be able to do it for real.